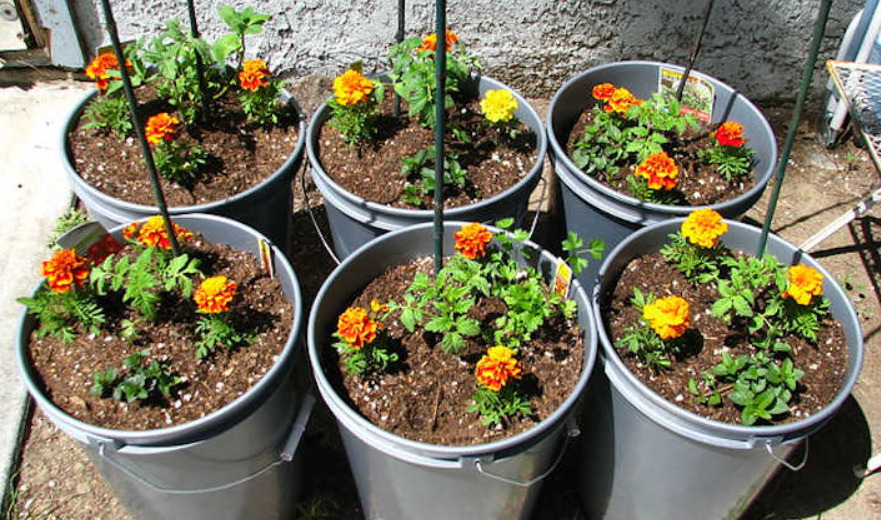 What are cilantro companion plants?

Cilantro, also known as Coriander Sativum, is a herb that thrives in cold climates and proliferates. It is also straightforward to harvest. Cilantro is an excellent companion plant for many plants in your garden since it draws in helpful insects and encourages the growth of some species. If you want your crop of cilantro to be as productive and healthy as possible, you should experiment with companion planting.

What is meant by the term “companion planting”?

Planting various kinds of plants near one another to create a healthy and balanced garden is known as companion planting. Companion planting may be implemented in several different ways. Still, in general, it entails grouping plants together so that they can provide some reciprocal benefit to one another. Marigolds, which repel aphids and spider mites, are popular companion plants.

The fragrant leaves of cilantro not only make it an indispensable ingredient in culinary preparations, but it also can hide the odor of other plants growing in the garden. Many bugs depend on their sense of smell to find their food. Protecting one’s crops from invasive insects and other predators is possible by interspersing the vegetable garden with aromatic herbs such as cilantro.

Adding cilantro to leafy greens like spinach, collard, lettuce, and others may improve their taste. Spider mites, aphids, and many other pests have made a home in these plants. Cilantro use brings in many beneficial insects, which feast on the settled pests.

Potatoes and cilantro are two plants that complement one another quite well when grown together. Potatoes may sometimes get infected by Colorado potato beetles, insects that feed on the plant. These beetles are easy food for the predatory insects drawn to cilantro, so your potatoes are safe from harm.

Planting okra alongside cilantro is good because cilantro brings beneficial insects to the garden, which helps the okra plant. Aphids and other pests that may be damaging to plants are common problems for okra. When hazardous insects or pests approach a plant, the helpful insects drive them away. When it blossoms, cilantro also draws in a lot of different kinds of pollinators. Carrots require nutrient-rich soil to grow. Carrots increase cilantro’s flavor, so plant them together.

Tomatoes, peppers, and eggplants are all more successful when cilantro is planted close to them. Most plants that bear fruit are susceptible to being attacked by various insects. The presence of cilantro in the area might entice predatory insects to these plants, which helps keep the number of pests under control. But cultivating fruit-bearing plants like tomatoes and peppers near cilantro presents several challenges.

The blossoms of dill and cilantro can bring helpful insects to your garden. The issue with this, though, is that it may lead to cross-pollination. Therefore, difficulties will be involved if you want to save cilantro seeds for later use. Additionally, it suppresses the development of cilantro by generating allelopathic substances that prevent the roots of cilantro from germinating, which is another method by which it does this.

Oregano and cilantro have quite varied requirements for the amount of water and sunshine they get. Therefore, you cannot cultivate them side by side. For the same reason that you can’t grow rosemary and thyme together with cilantro, you must put them in separate pots if you still want to grow them close to one another.

Are cilantro and basil compatible?

Between the middle of spring and the beginning of fall, you should plant cilantro seeds every few weeks to maintain a healthy crop in the garden. Only trim the stem of the cilantro plant after the blooms have withered and gone brown if you want it to continue to thrive throughout the summer, even though you will be gathering a lot of it. Until late autumn, the plant’s stem will keep producing new leaves throughout the growing season.

Why are cilantro companion plants popular?

These plants do not thrive in soil high in nitrogen, which is essential for successfully cultivating an abundant cilantro crop. Still, they perform well in soil that is low in nitrogen or includes other nutrients. As a result, the strategy that would provide the most outstanding results would be to plant them in various containers and then position them close to one another. It would be the ideal way to get the desired effect.

Are cilantro and basil compatible?

When growing cilantro, among other plants, some suitable companions include basil, mint, yarrow, and tansy. When planted underneath tomatoes, a herb with a cool-season growth pattern, frequently referred to as Mexican parsley, may undergo growth more typical of a warm-season plant. Farmers and gardeners plant certain crops near one another to discourage the development of specific pests, attract insects that are helpful to the harvest, and boost growth.

According to the conclusion of cilantro companion plants, Garlic, peas, and basil are the three plants that get along best with your cilantro. Make sure you keep this knowledge about companion plants for your cilantro. Tomatoes and potatoes may cohabit to some degree if the right conditions are met. Oregano and fennel are the herbs that don’t go very well with cilantro; however, fennel is the least offensive of the two.

What is meant by the term “companion planting”?

Gardening with companion plants is a tried-and-true technique that benefits and safeguards crops more susceptible to damage.

Are tomatoes and cilantro compatible plants to grow together?

Grow companion plants with tomatoes to deter pests and draw in natural enemies. The open blossoms of cilantro attract a wide variety of predatory animals, including some types of parasitic wasps that feed on tomato hornworms.