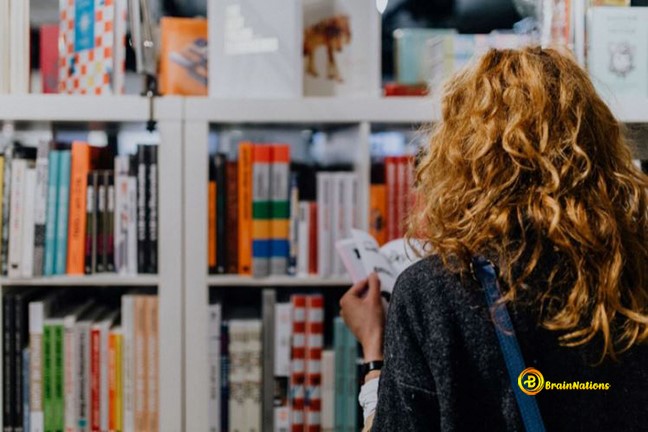 Kaboom Books is a used bookstore on the eastern outskirts of Woodland Heights, just above Downtown Houston. We operated a succession of booksellers in New Orleans, in the back of the French Quarter, for almost 30 years. Our mission in Houston is still the same: to provide a bookstore based on complexity and an inventory of ideas that serves as a sounding board for social conversation across Houston’s hundreds of communities.

Kaboom Books is a large storefront on Woodland Heights’ ancient commercial row. It’s my favorite secondhand store. K A B O O M is written in giant characters on the storefront. Inside, the high-ceilinged area is a treasure trove of encyclopedic-range literature. The store is also a paper sculpture, with lofty faces and distinct intervals shelved and stacked. There are spiraling piled shapes and an old hand press with classical dolphins on the desk.

John Dillman is a co-owner of Kaboom. John has a patient, wandering, themed, worldly, and witty talk. Only a streetwise, storytelling culture could have produced him: New Orleans. We recently talked about a dying buddy, his childhood encounter with a Doppelgänger, and the misfortune of having the same name as a No rogue. A reverence for stillness characterizes his conversations.

Kaboom Books is a used bookstore in Woodland Heights, close to Houston’s downtown area. Their 100,000-book inventory includes both current and long-out-of-print titles. They hold author readings, book signings, and other literary events that are open to the public regularly. The small bookstore sells pre-owned books in various genres, as well as art, history, social, and physical sciences, and conducts events on its terrace.

The mission of Kaboom Books:

Despite the location change, Kaboom’s mission remains the same: to provide an inventory of ideas and serve as a sounding board for social discourse across Houston’s hundreds of communities. The proprietors spent more than 30 years acquiring their collection while owning a succession of booksellers in New Orleans, and it was previously located in the back of the French Quarter. Kaboom provides exciting events, art displays, and readings with authors and artists regularly, in addition to their never-ending selection.

How did you end up owning a used bookstore in Houston?

It all started when I was living in New Orleans around 43 years ago. I had accumulated far too many books and needed to get out from under them. So, for about a year and a half, I sold books at a flea market in the French Quarter, where I realized that the customer base was exciting and educated and that I was good at selling things. So, in the French Quarter, I launched my first shop, which my wife and I ran for more than 30 years.

What impact has the pandemic had on your store in the last year?

The first quarter was fantastic, but we had to shut down in the second because Houston had become a hotspot. For the second and third quarters, we were completely shut down. However, if you’ve been in small business for a while, you’ll realize that some years, like Katrina, there are unforeseeable events. We had some money set away, so we re-invested it in the firm to keep it afloat. And we spent our time straightening up.

How has business been?

Since you reopened, how has business been? When we reopened in October, I told myself that if we just did half of what we generally did at this time of year, I’d be happy. We reduced our hours to three days a week, six hours per day, and we accomplished the same amount of work in those shortened days as we did in our regular eight-hour days. It makes things a little busy, but I’m happy with it. Fortunately, we have a highly devoted customer base. And it appears that people are reading more this year than in previous years.

How do you do it in the event of a pandemic?

Historically, bookstores have struggled to compete with Amazon. I do not attempt to compete. As a secondhand bookshop owner, the benefit has items that customers can’t get anywhere else, in excellent condition, and reasonably priced. My consumers are ecstatic, and they only vent their displeasure via the internet.

We tried selling online for a while, but I was never a fan of that marketing method. We don’t have to because we make enough money from the shop. We’ve been using social media a lot more lately. I’m a private person who isn’t particularly fond of social media. On the other hand, my wife is in charge of it, and it has grown to be a significant part of our lives.

What’s it like to go to the store and shop?

From the outset, my basic layout for a bookstore of Kaboom Books was proving to be labyrinthine. We have 84 sections ranging from Earth Sciences through Astronomy, Physics, and Social Sciences. It does, however, feel like a labyrinth if you’re under 4 feet tall. It’s a hit with kids, and I believe it’s also a hit with adults.

Aside from a bit of creak and sigh, the store’s sound is the p-k, p-k of the proprietor slowly re-ordering one or another portion. He says, “I haven’t re-ordered that section,” as if it were awaiting meditation. Each month or so, I imagine him entering the store’s depths and rotating through the world’s printed legacy.

His close-up attentions appear to be recognized by the literature. Paperback and hardcover volumes are in stock, with a few rare ones kept segregated by a wire grate that may have been part of the former storefront.

I had just begun rebuilding our store before Hurricane Katrina hit in 2005. After Katrina, I realized that business would tank for the next ten years, so it felt like going to Houston was the only reasonable thing to do. Kaboom books Facebook, willow books, Kaboom publishing, beckers books, Brazos bookstore, quarter price books, sell books, Copperfield books.